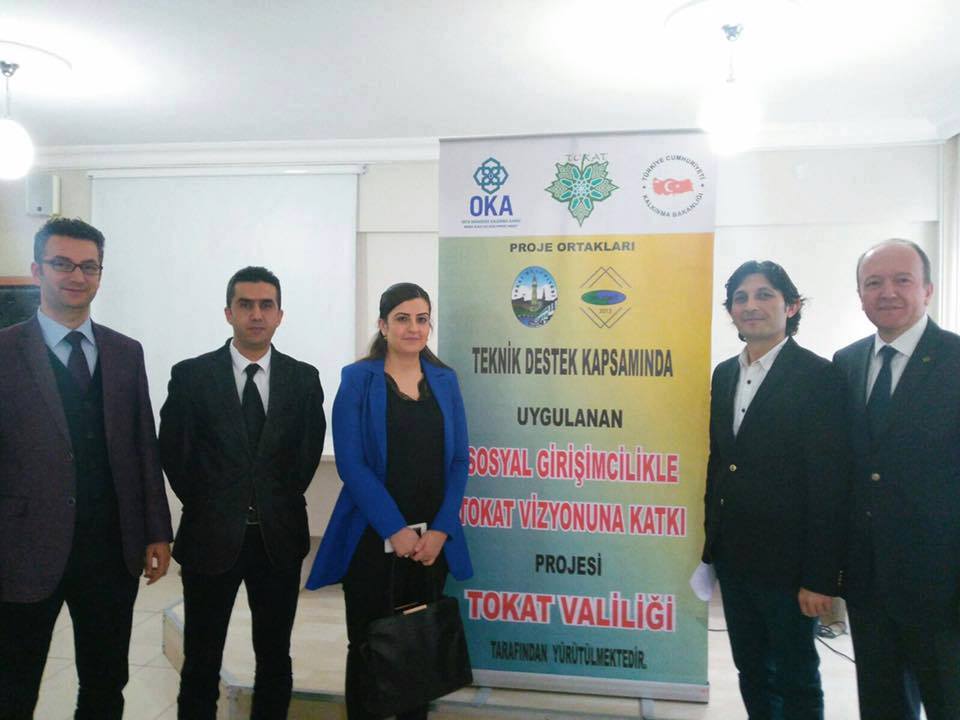 Social entrepreneurship education
Social entrepreneurship training The trainings of the “Contribution to the Tokat Vision with Social Entrepreneurship and Social Entrepreneurship” project, which were jointly organized by Tokat Municipality and Tokat Economic Development and Vocational Association, were held in the City Council Meeting Hall.
At the document ceremony held at the end of the trainings, Deputy Governor Dr. Soner Karataşoğlu, Deputy Mayor of Tokat Selahattin Kelemci, City Council President Abdullah Gürbüz, OKA Tokat Investment Support Office Provincial Coordinator Mehlika Dicle and Expert Önder Karagözlü and TEKMED President Müslim Kaçmaz attended.
Providing a brief explanation about the project, İlhan Yayar, the project coordinator, mentioned that social entrepreneurship started to develop rapidly after 1970s and that it was led by Bangladeshi Muhammed Yunus in the world. Yayar said that with the project, they aimed to develop the social entrepreneurship phenomenon in our city, and 23 participants from fourteen public and NGO institutions attended the trainings and received the participation certificate.
City Council President Abdullah Gürbüz mentioned that they are very happy for the development of civil society and hosting such an education that will contribute to the Tokat Vision with social entrepreneurship, and social entrepreneurship is actually related to the work of the City Council.
Deputy Mayor of Tokat, Selahattin Kelemci, is not only about infrastructure investments, but also they have given special importance to social activities and initiatives in recent years, they tried to show people how to achieve fishing instead of fish, they try to do social enterprise activities in every neighborhood and street. He said that they wanted to benefit from the social entrepreneurship training of the municipality, which is the project partner.
Deputy Governor In his speech at the document ceremony, Soner Karataşoğlu stated that he wanted to participate in some of the social entrepreneurship education, but could not attend due to other programs, but when the subject was a social enterprise, he paid great attention to everything social within him as a social policy expert. He brought together 70 NGO representatives who had the capacity to make projects for the first time as the Governor on February 16, and that they were given trainings, awareness was raised, and they determined their name as “The Development of NGO Dialogue for Contributing to the Vision of Tokat” because this cooperation was important.
Deputy Governor Soner Karataşoğlu said, “The goals of 2023 and 2071 have very important visions and goals for our country and our city. We will try to reach the vision goals without crushing under wild capitalism, based on the principle of social state, in reaching the goals written in the Vision Document announced by our Governor Mr. Cevdet Can. The main issue in social entrepreneurship is to be able to solve the social problems with our people radically without any profit. At different meetings we have done, we always say that ‘he says, but he struggles to solve the problem’. We also have a problem, a lost treasure, I say this as someone who has prepared a doctoral thesis about social exclusion. I believe that it would be sufficient to research and learn the foundations found in the book “Interesting Foundations” published by the General Directorate of Foundations. When we learn how social problems are solved 400-500 years ago, we need to feel sorry for our current situation, foundations that serve the elderly at home, repair the hours in mosques, carry ice to the public in summer, what an interesting civilization was, this is our lost treasure, to find this treasure again, to win we have to work and receive training. Perhaps the most important of these trainings is the social entrepreneurship trainings that are rapidly accepted all over the world. “The solution of social problems will be possible with an entrepreneurial spirit and with the increasing number of social entrepreneurs that will prioritize the sustainability goal.” Karataşoğlu said, “Our governor’s office also has a target, to be the province where the social problem is less and the sensitivity is highest in 2023. For these reasons, we would like to thank the Governor Mr. Cevdet Can and the Central Black Sea Development Agency Board of Directors for supporting all kinds of efforts for the development of social enterprise in our province, as they attach importance to the Social Entrepreneurship training supported by OKA within the scope of Technical Support. ”

The proposed project 1- with the coordination of Tokat Economic Development and Vocational Training Association...

HOT OFF THE PRESS

Newspaper is quite a powerful tool that circulates pieces of information to people. It is one of the greatest means...